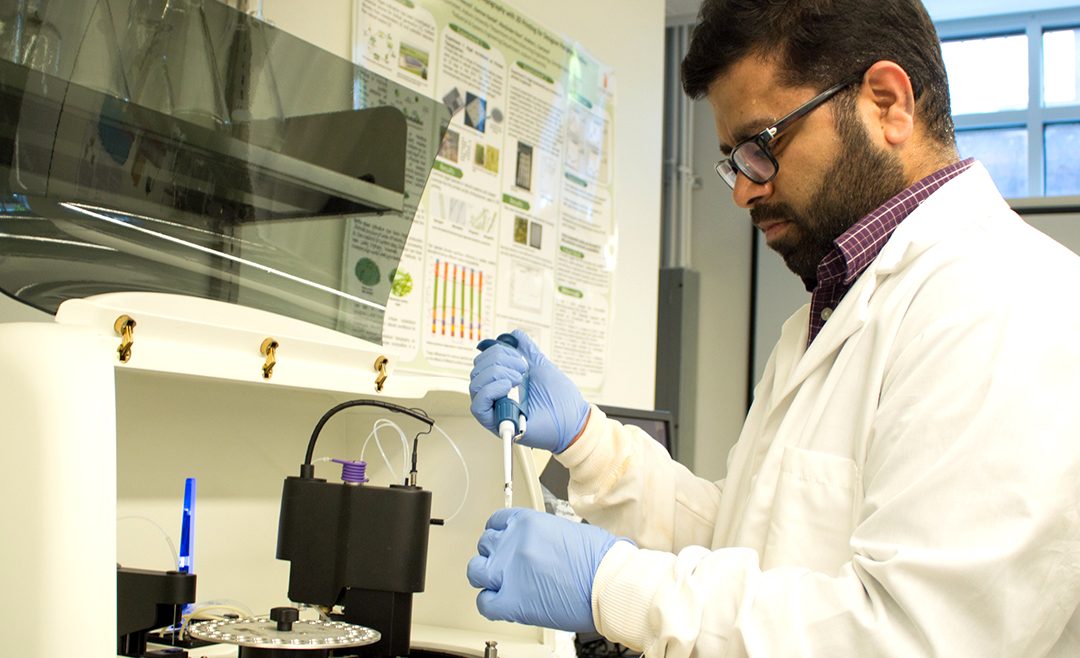 The poultry industry in Alabama contributes more than $15 billion to the state’s economy each year, but along with the revenue and jobs, it also produces about 1.8 million tons of waste, or litter, annually.

Ensuring this litter doesn’t become a source of excessive phosphorus in surface waters is one of the goals of research that Auburn University is conducting in conjunction with the University of Wisconsin–Madison and the University of California, Riverside.

The three-year study is being funded by a $415,765 grant from USDA-NIFA’s Agriculture and Food Research Initiative (AFRI), the nation’s leading competitive grants program for agricultural sciences.

Poultry litter is rich in phosphorus, and the loss of this nutrient into waterways is a large concern, especially in states like Alabama, where litter is commonly used to fertilize fields. An excessive amount of phosphorus can cause toxic algae blooms in surface water, leading to deficient oxygen levels and fish kills.

In Wisconsin, the situation is similar to that in Alabama, but with dairy cows instead of chickens. More than 1.8 million dairy cows generate 8.7 billion gallons of manure annually in the state in a $43-billion enterprise. In fact, manure production in Wisconsin is beginning to exceed the capacity of the land base, as evidenced by surface water, groundwater and air quality issues.

“Due to the cost and logistics associated with the transportation of poultry litter away from the farm in Alabama, farmers typically apply poultry litter repeatedly in the same place, resulting in high levels of phosphorus in the fields,” Jasmeet Lamba, assistant professor in the College of Agriculture’s Department of Biosystems Engineering and lead investigator in the research, said.

Farmers apply dairy manure on row-crop fields in Wisconsin in much the same way that poultry litter is applied in Alabama, Lamba said.

“It’s a similar problem,” he said. “Our overall goal is to look at two different agro-ecoystems that are experiencing problems with phosphorus management.”

In Alabama, Lamba and fellow researchers will concentrate on pastureland in the Sand Mountain region of north Alabama. In Wisconsin, the focus will be on a row-crop field.

“We’ve done some research in the Sand Mountain area and found that, instead of phosphorus loss in surface runoff, most of the phosphorus is being carried beneath the soil surface, and that’s a big concern,” Lamba said.

Lamba said that, in some places in the Sand Mountain region, phosphorus levels are four times the recommended optimum levels.

“We want to improve our knowledge of fundamental processes controlling the fate and transport of phosphorus in soils, especially colloidal phosphorus, or phosphorus attached to very small particles,” he said. “Then we can develop appropriate nutrient management strategies, decision-support tools and models.”

Researchers will attempt to quantify how much phosphorus loss is occurring in each production system.

“We’ll collect soil cores from a pasture and a row-crop field and then use X-ray-computed tomography or CT scan to learn more about the soil characteristics,” Lamba said. “We’ll then use those cores to conduct laboratory experiments and modeling, identifying how much phosphorus loss is occurring in each core in dissolved and colloidal forms.”

Using this data, collaborators at the University of California-Riverside will create a new version of the HYDRUS model, a commonly used software model that can simulate water and contaminant transport processes through soil. Most current models lack colloidal phosphorus transport routines, Lamba said.

The project involves a multi-institutional and multidisciplinary team of researchers with complementary research expertise.

“The long-term goals of this project are to advance our knowledge on fundamental phosphorus transport processes, provide valuable datasets for? decision-support tools, develop or refine models that lack the capability to quantify subsurface phosphorus losses, and contribute to the sustainability of Alabama, Wisconsin and U.S. agriculture while maximizing water quality benefits,” Lamba said.

In addition to Lamba, other members of the research team include Puneet Srivastava, director, Water Resources Center; K.G. Karthikeyan, University of Wisconsin–Madison; and Jirka Šimunek, University of California, Riverside.