This year we initiated a new and very special AWW Award: the Water Spirit Award. This award is intended to recognize and honor someone who exemplifies a spirit of involvement, enthusiasm, and concern for water resources in Alabama and beyond. Sound familiar?  It’s because you might have heard it before when we explain why we chose the Caddisfly (AKA – Hydropsyche, or water spirit) as our mascot.

As we considered potential candidates, it became obvious that there is no one who fits this description better than Eric Reutebuch. Eric takes the definition of “water spirit” to another level by truly loving all things related to water, instilling his love and respect of the water in others, and dedicating his time and energy to protecting and restoring water quality. 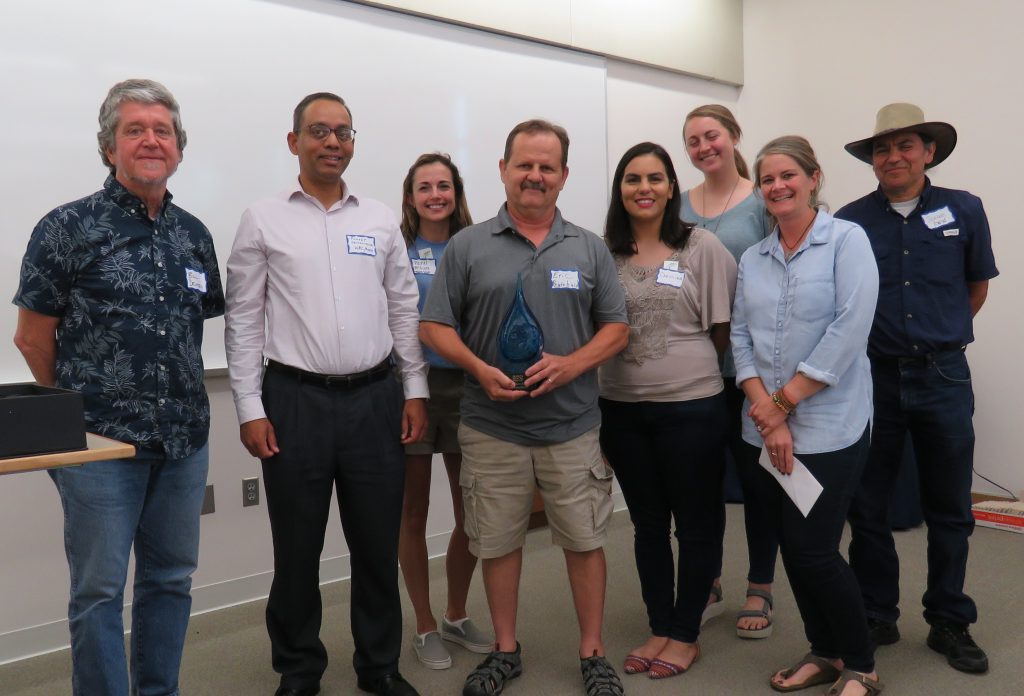 His love for the water is in his blood. He has been fishing and boating his entire life, inspired by his dad who was a river guide and would take the city slickers from Chicago and Gary down the Tippicanoe on fishing trips. Even before he began his career with AWW, Eric had a great deal of professional experience working with water. Eric served as a Peace Corps Volunteer in Nepal in the early 1980’s where he helped to promote local aquaculture.

Eric began working at Auburn University in 1988 after finishing his M.S. from the AU Department of Fisheries and Allied Aquaculture. He worked for 17 years with Dr. David Bayne’s Rivers and Reservoirs Group. He joined the AWW team in 1996 (becoming full time in 2006), and brought along his considerable experience and knowledge to improve AWW training materials and workshops, develop waterbody reports, conduct data interpretation sessions, and to provide excellent technical backstopping to monitoring groups who were trying to use their data to make a difference.

Bill Deutsch commented that “Eric’s background in water science helped make the AWW program nationally and internationally recognized. Eric became the Director of AWW in 2014, and did an excellent job of leading the AWW Program until his retirement in 2017.

We miss Eric and what he brought to the day to day life of the AWW team. Thankfully, he has not become a stranger and continues to provide advice and support for AWW, conducts monitoring, and helps with monitor training. He is also the president of Lake Watch Lake Martin: one of the oldest and most active AWW Groups. He keeps a watch on the water in front of his beautiful home on Lake Martin and he is always ready for friends to come by and enjoy his little piece of paradise with him.